Skip to content
HomeBlog PostEnd Of Year Roundup: The 11 Most Popular Blog Posts Of 2017

I would like to wish you all a fabulous Christmas and I look forward to 2018 where we can expect Jamie’s new album (all original songs), as well as some live shows!!.

On Thursday 21st December Jamie posted a lovely roundup of 2017 on his Facebook page. I thought this was a really nice personal touch and it’s really informative too! If you haven’t seen it yet, take a read below. 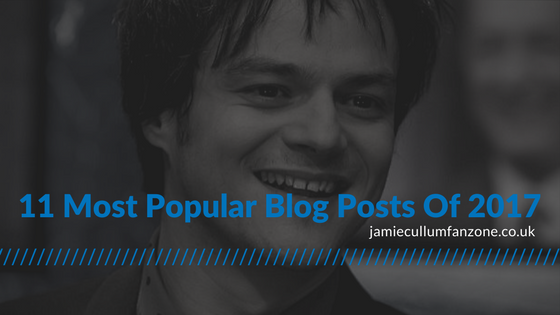 So as we are nearing the end of another year, I thought now is the perfect time to share with you the most popular blog posts from 2017. So put your feet up with some hot chocolate and enjoy.

1 – Audio: Listen To New Track “Be Our Guest” From Jamie Cullum & Eric Cantona

Take a listen to Jamie’s version of “Be Our Guest” which features on the new album Jazz Loves Disney 2, the track also features Eric Cantona.

Do you know everything there is to know about the UK’s biggest Jaz artist? Here are 21 fascinating facts you probably don’t know about Jamie Cullum.

3 – Interview: Jamie Cullum’s New Album Will Be All Original Songs

Jamie recently played a free show on Muottas Muragl as part of this year’s Festival da Jazz. Before he went on stage Loadsofmusic.com interviewed him.

During this interview, Jamie provided an update on the creation of his new album.

It’s great to hear that Chris, Brad and Jamie are writing songs together, read the latest tweets here!

Jamie will feature on the new Disney album Jazz Loves Disney 2 – A Kind of Magic with his version of “Be Our Guest” from the film Beauty & The Beast. Also on the track with Jamie is Eric Cantona.

Jamie features on the new album “BBC Radio 2 The Piano Room”, released 27th October 2017. Jamie has not one but two tracks on the album:

This week Jamie gave us a sneak peek into the recording of his new album which he is calling #LP8 until the official title is announced. A simple piano-vocal makes me very excited!!

In August I asked you, the fans on Twitter & Facebook, what your top 3 Jamie Cullum songs are and I was overwhelmed with your responses. This question prompted a really interesting conversation among the fan community, and it was great to find out which songs everyone loves the most.

10 – Video: “Show Me the Magic” – Jamie Cullum Behind The Scenes

This is the behind the scenes video from the McArthur Glen Christmas advert 2016. Including the recording of Jamie Cullum’s ‘Show Me The Magic’ track at the famous Abbey Road Studios.

So how many of you know about the Song Society?

This is something Jamie came up with back in July 2015. In Jamie’s own words, this is what the Song Society is all about.

I love learning other people’s songs. I find it teaches me a whole lot about songwriting which is particularly inspirational when I’m writing a new album (which is what I am doing NOW!) This time I thought I’d film and record it for you all to check it out and start an official Song Society. The songs I will be doing will be learnt and performed live, warts and all within an hour. These are NOT definitive reconstructions, just a window into my own education

So there you have it, this year’s most viewed blog posts. Which one was your favourite? let me know in the comments below.

If you don’t want to miss any of the latest news & conversations, sign up for the free weekly newsletter.