The Eighty-Eight volume two follows the first edition released back in 2013, titled “The Adventurous magazine for the occasional thinker”. The magazine was released on 1st September with contributions from Evie Wyld, Rebecca Hunt, and Matthew the Horse, Sergio Membrillas, Professor Green, Stella Creasy, Sophie Dahl and Ben Folds. To celebrate the release, Jamie has arranged a launch event in London.

It’s not often that one finds themselves at a Design Museum for the launch of a magazine. It is not how I would usually spend my Thursday evening. But this magazine is different to most that I read. Trashy celeb magazines mostly, none of which add any value and let’s be honest are not particularly inspiring. 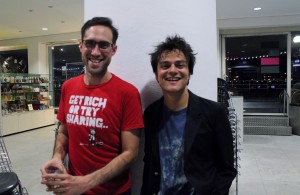 Of course I am a fan of Jamie Cullum, and I won’t lie that this is part of the reason why I find myself here tonight. However this is not the only reason; I have read volume two of The Eighty-Eight and found myself to be rather unexpectedly captivated. The beauty of the illustrations and chosen photography throughout is something of real beauty. I found myself reading and enjoying essays, travel articles, even the history of flamenco that I would not have ordinarily picked off the shelf.

And so here I am at the Design Museum on Shad Thames London, a stone’s throw from Tower Bridge. We are situated in what appears to be the main lobby, just passed the ticket desk, and before the coffee/gift shop. My first impressions are telling me this is a great setting for Jamie to celebrate the launch of The Eighty-Eight volume two. The walls are a dark blue, with a wall of glass windows on one side. With its wall mounted traffic lights and road signs, everything about this place oozes creativity. We take our seats and Jamie personally greets everyone.

The mood and atmosphere bubbling in our intimate room radiates relaxed, casual, friendly and low-key. Whilst I am waiting for the evening to begin it provides me with the opportunity to talk with other guests and discover they are equally as intrigued as I am for tonight’s launch.

The one hundred and twenty audience, some with drinks from the bar, are all seated a little after 7.15pm.

We are being told the agenda for the night. First up is a reading from Effie Woods, Effie is an actress who has appeared in UK shows such as Emmerdale and Hollyoaks in the city, an interview with Jamie conducted by Steven Watson from Stack Magazine, which will include a QA from the audience. And then after a short break we will enjoy a live unrehearsed hour-long improvisation with Jamie and Beardyman.

Effie Woods take’s her seat and starts to read Donuts by playwright Duncan MacMillan. It’s a story about the four stages of grief, which in parts is actually quite light-hearted. I don’t particularly have the best view at this point, however I have quickly realised I don’t need to see Effie to appreciate the way in which she is transforming these words on a page. I have cast my eyes down; I am listening intently to how passionately she reads. My imagination running wild as the story on the page is brought to life. I look around the room, is everyone else still on board and as engaged as I am, or was this story perhaps a little too lengthy for some? I am not sure!

Steven Watson is the founder of Stack Magazine. Stack Magazine select the best independent magazines and send them to their subscribers each month. Incidentally, they recently sent out The Eighty-Eight volume two to their subscribers in August. You never know what magazine you are going to receive in the post each month. I kind of like the sound of that! Steven has just been introduced and after a brief introduction has asked Jamie to join him for an interview. 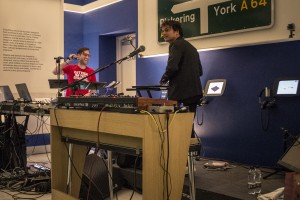 I am immediately struck at how well Jamie constructs his answers. He is speaking well and his answers are a telling sign of his passion for this magazine and his vision for its future. It is clear that a lot of work goes into its creation, and it is only a small team of people who make it happen.

During the interview Jamie is telling us that he has always had a passion for magazines and writing. Jamie realised he had the opportunity to create something that was a true reflection of him behind the music. The interview continues, with Jamie explaining the magazines progression since volume 1. After around 40 minutes the interview ends and we have a 10-15 minute break to stretch our legs, get a drink etc.. before Jamie will be joined on stage by Beardyman. Jamie has already told us he is nervous for this performance, given he’s only had a couple of minutes with Beardyman in sound check.

Beardyman is a Beatboxing champion whose music contains elements of drum and bass, dubstep, techno, reggae, trance, whereas Jamie is known predominantly for jazz. This shouldn’t work right?

It’s a little after 8.45 and Jamie is taking the stage with Beardyman. They launch into their performance with Jamie on the squidgy black seaboard, and Beardyman is on his Mac Books and keyboard. Jamie is well known for his energetic performances and it’s good to see that Jamie is no different tonight.

It takes balls to get up and play with no rehearsal, but these two are getting off to a flying start. This improvisation has a great beat and the audience love it. Jamie looks as at home with the seaboard as he does with his Yamaha piano. They play non-stop for 45 minutes before breaking briefly and launching into their next improv. 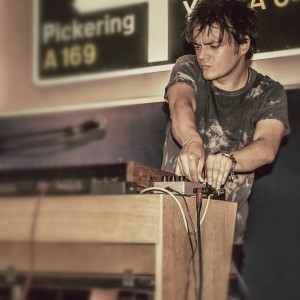 Jamie’s effortless way of making up lyrics on the spot is in full force. I am enjoying a song he has made up about playing at the Design Museum and I am reminded at how similar it sounds to his own music. Beardyman is playing his part too and the audience love it. I am struck by how easy they are making this look, although I’m sure it isn’t. Each piece of music reggae through to techno seems to flow effortlessly to the next. I can hear a small amount of chatter around me, but on the whole they have the audience in the palm of their hands.

It seems all too soon that Jamie is sadly announcing it’s the last improv as they need to wrap things up. But it seems they have saved the best for last. The evening climaxes with Jamie and Beardyman leaving their stages to come and stand right at the front of the audience to perform. We are being treated to a performance free from all the techno gadgetry. Beardyman is beatboxing; Jamie is singing “Thank you for the design”.

In conclusion despite my earlier uncertainty , the collaboration worked amazingly well, and in my opinion should be repeated again. I am keeping my fingers crossed for that.

This inspirational launch proves that not only is Jamie one of the most talented musicians of our time. He also has the creativity and passion to curate a successful magazine that I am sure will have a bright future.