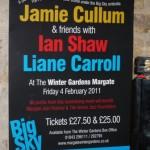 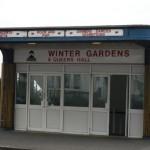 I have been trying to think of 3 words that would best describe this show, but 3 words are simply not enough.

First and foremost I felt utterly privileged to have been in the same room as such great musicians.

The only way I can describe it is to say that it felt like watching a load of friends hang out. Friends who were totally comfortable in each others company. No egos, just passion for music.

I loved all the imperfections, the many laughs they gave us with their funny jokes or even Jamie forgetting the words to one of his own songs.

This was a gig like no other, not your typical Jamie gig, you had no idea what was coming next but you knew that whatever happened you would be treated to yet another amazing performance.

I never realised just how funny both Ian Shaw and Liane Carroll are. Their on stage chemistry was lovely to watch. Two good friends having fun, unfolding before our very eyes.

Liane has such a strong voice; but she also had a very relaxing influence on me. Every time she sang, I sank into my chair completely enjoying the journey that her voice took you on.

I have to apologise in advance that I did not catch all of the songs that Ian and Liane & Christine sang, purely because I was too caught up in the show. But I hope this review will give you an idea of how great the night was.

So the night started with Jamie being introduced on stage, and he sprung straight into “Love For Sale”, we knew then this was going to be a rather special show.

Jamie then went straight into “Come Together” – loved this version of such a classic song. A real smooth but funky sound.

Jamie’s speech to the crowd was amazing, so inspiring and spoken with true passion. In short he explained how less funds being made available for such great music was wrong.

We were then treated to “It Had To Be You” and “But Not For Me” – two great songs that were an absolute joy to hear as we don’t get to hear them very often.

Jamie then handed over the stage to Ian and Liane, and they sung an amazing duet of “You’ve Got A Friend” – It brought a tear to my eye. At this point Jamie took a seat on a speaker at the back to take it all in.

We were also treated to a few performances from Christine Tobin, the Director and Vortex. She has such a lovely voice. Just before the break Jamie came back on stage with Ian and Liane & sang “Old Devil Moon”. 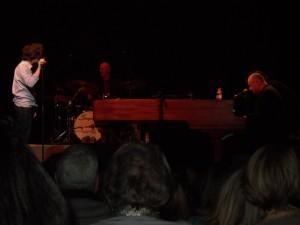 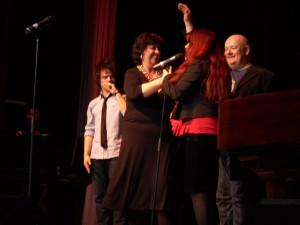 The second half was opened by Liane, which included some of her own material.

Following Liane’s great performance, Ian & Jamie took to the stage. Ian played piano whilst Jamie sang “In the Wee Small Hours” Christine then came back on stage to sing “Georgia On My Mind” with Jamie, and it was just beautiful.

For the last 10 minutes or so of the show Jamie took the floor and played some of his music we all know and love him for. Starting with “Don’t Stop The Music”.  There were a couple behind me who had clearly not seen Jamie before, and when Jamie sang out the chorus to I’m All Over It, the crowd went wild and to hear their reaction to both that and Jamie’s performance was amazing. They sounded a little shocked but totally in the moment and loving it. It’s times like that, seeing that look on people’s faces when they see Jamie perform for the first time that makes me proud to be a Jamie fan. To see how he truly touches people is an amazing thing.

“All At Sea” followed with gushes from the audience, I knew from that moment it was clearly a big favourite and would go down well.

“I’m All Over It” got everyone up to their feet clapping and dancing, ending in true style!

Everyone then came back on stage for one final jam session, I felt so sad as I could have sat and listened to them all night.

Unfortunately I was not right at the front so I decided not to record any videos as I knew that audio would be clearer from where I was sat, hence the audio uploads.

So many funny moments like Ian offering Jamie a biscuit and asking if he would be ok on stage on his own. Or Liane telling Ian “You fame hungry bint, get off the stage”

I loved how Jamie would start off playing one piano (I should probably tell you there were two on stage, Jamie’s Yamaha and a brown walnut baby grand) and then Liane would come and join him and take over what he was playing. And the night saw lots of that. It was great to see them all bouncing off each other, they looked like they were having an amazing time.

As Stephanie said in her review, we quite by accident found ourselves in the same small cafe/jazz bar as Jamie and the rest of the band/organisers for dinner before the show.

I couldn’t take photos inside, but here is a photo of the place. 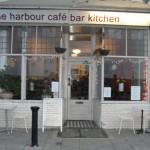