Skip to content
HomeGigsGig review: Jamie Cullum at Under The Bridge 29/6/11

Under The Bridge – A beautiful newly opened venue at Stamford Bridge, which has a very funky blue ceiling over the stage, talk about a great stage setting for any band.

And that’s not all…

Everything about this stylish venue oozed sophistication even down to the detail in the toilets. This venue fails to disappoint when it comes to class.

And when it comes to class you can’t get any better than Mr Cullum!

I managed to get my place dead centre at the front, perhaps a little too close as there were no barriers, just fans a low stage and Jamie. 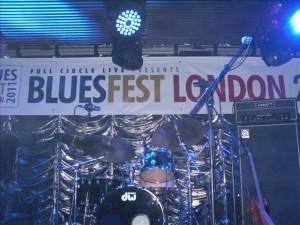 Being this close was a great opportunity to see the magic that goes on on stage. You could really see the love for good music on that stage that night and I was in awe of it.

I was overjoyed to hear that Ben would be joining the band all night, (Ben was standing in for Rory) and then to delight us with taking the vocal on ‘These Are The Days’ was amazing. Ben plays guitar with such ease, it would make anyone learning to play guitar sick. Is there anything this man can’t do?

Jamie started the night with “So They Say”, a real favourite with many Cullum fans out there. It was a great song to start with and really got the audience going.

Jamie told us he had taken tips from Coldplay from Glastonbury (whilst he watched at home in bed) and decided to start the night off with his best known tracks, to which he did.

I won’t bore you with the set list, but Jamie continued on with the usual suspect of songs, All At Sea, I’m All Over It, Don’t Stop The Music to name but a few. And yet again If I Ruled The World gave me goose bumps. 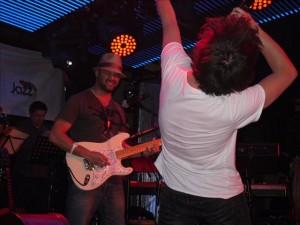 Jamie joked about Beyonce at Glastonbury and how she had to have a chord played every time she said something, to which he then asked for the same thing from his band which was funny (video to come). And being from Swindon myself I loved his joke about Swindon FC, even if it did fall flat with some people.

With the first few opening tracks out of the way the atmosphere was electric, this seemed to make Jamie even livelier, or perhaps that had something to do with the two Jack Daniel shots he claimed to have had before coming on stage haha.

Jamie seemed very relaxed with his banter and jokes to the audience, and he was actually pretty funny. I do love Jamie’s sense of humour and loved his comment about his gigs making you feel like you’ve been there 7 or 8 hours lol

One thing that really did strike me was Jamie’s vocals, they seemed on top form. And if at all possible I felt he had perfected his piano playing since I last saw him.  Not that I’m an expert but it sounded especially beautiful.

And I have to say, the melody and tune to this new track we are all talking about written by Jamie & Ben made me melt. It’s truly beautiful, and it’s not even finished yet! If this is what the album is likely to sound like, then wow!

Now I know we have all come to know and love our sing alongs with Jamie, but there is something extra special about being a part of it in a smaller venue. I think we did Jamie proud as we all sang to High & Dry with our do do do’s

Jamie’s traditional ‘I Feel Fine….’ at the end of ‘These Are The Days’ which we have all now come to know and love and join in with was brilliant. It really got the crowd going and you could tell that everyone in the place was having an amazing time.  It felt like one big party!  You can see my video of it here

Even at a smaller gig Jamie can’t help but take himself off stage, joining us all in the center of the room Jamie sang Caravan, which with the horn section sounded fantastic and really gave it that Salsa feel. Caravan is not usually one of my favourites, but it sounded great. 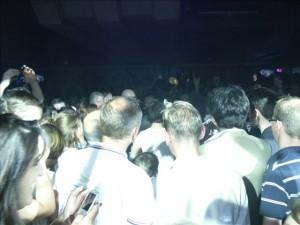 I was really moved when Jamie ended the night with Gran Torino and changed the words and sang something along the lines of “my whole world is just us 3” at the end of the song. It brought a tear to my eye and was a beautiful way to end the show.

I still can’t put into words just how brilliant this show was, other than to say that coupled with the amazing band, Jamie’s energy and breath taking performance plus the amazing little gem that is Under The Bridge, this has undoubtedly been one of the best gigs I have been to in a long time.

I would also like to take a moment to mention that the staff at UTB were amazing, so friendly and helpful. Other music venues could learn a lot from them. Check out other gigs they have coming up here

An outstanding performance Jamie, thank you for the memories 🙂