First of all, I would like to start by pointing out that I didn’t think I would have the opportunity to write a review about a Jamie Cullum concert so soon in my life.

My name is Thainá Pinheiro, I’m 19 years old and I live in Cuiabá, Brazil. Just for the record, my city is 1.600 km away from São Paulo, where the concert happened.

I got to the venue at around 3 pm, it actually took me 1 hour to get there. It wasn’t crowded at all and I was able to get a good spot at the front. We watched the other concerts and it seemed like forever for Jamie’s to start. 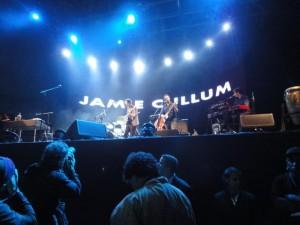 Laura Marling’s concert ended and Jamie’s band entered the stage. We fooled around with Tom Richards and his other band mates, they were all great and friendly. They left the stage and we knew the moment had come. By that time I was crying already, I was there, and it was about to start.

Jamie entered the stage like a flash and started with “I’m All Over It”. His energy was the first thing I noticed, he’s electric on stage, you can see how passionate he is about what he’s doing. A little teasing and he went on with “Get Your Way”, climbing on his piano and gaining the hearts of those who weren’t familiar with his work. He took a sip of Whisky with Guaraná and went back to his piano for the next song.

Twentysomething started and I started dancing with it, and all of a sudden he starts playing The Funeral March, which was very funny to watch. This song never fails to get us going, and again, his energy was unbelievable.

If there was a single soul in the room who was still not absorbed by the vibe of the concert, that ended when he started playing “Don’t Stop The Music”. We could hear the screaming and hysteria, the whole crowd singing along, you could tell people were amazed by the concert.

He was very talkative, telling us about his daughter and the fact that he’s been coming to Brazil for the past 5 years and that he loves to play here. I don’t actually remember if he said that in this part of the show, unfortunately. What he did do was tell us that for this song he had prepared a little tribute to Brazil. And then there was “Next Year Baby”. All I have to say: AMAZING. He fitted remarkable elements of the Brazilian music in it, it was awesome.

The ones that followed was “These Are The Days” and “Mind Trick”. The first is one of my favorites, and never fails to touch me. The second is very familiar to the Brazilian people, since it was featured in a soap opera a few years ago. Everybody was singing along, and by that time Jamie had already loosed his suit and tie. 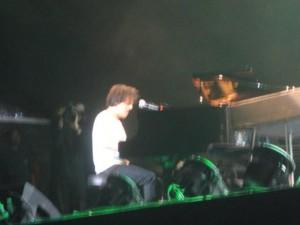 After that, he sat on his piano and started telling us a story of when he was 14 years old. He said that a very pretty girl loved this song, and at the moment he learned how to play it.  It was “High and Dry”, originally from Radiohead. I couldn’t believe it. He had asked on twitter if we had any requests for the show, and I asked for “High and Dry”, and he played it. That was the best moment of the concert for me, that was the moment where I remembered all the struggle I had to go through to get to the concert. That was the moment I remembered why Jamie caught my attention when I was 14 years old and made me love him and his music. For me, it all came down to that moment, and to know that no matter what happened, I would have that memory forever. He asked us to sing with him the “doo doo doo” part at the end, and all he could do was stare at those 20 thousand Brazilians singing for him. We could see how emotional he was.

It took me a while to recover from that moment, and then “Mixtape” went on, my favorite from The Pursuit. Awesome song, and what an amazing band he has, they were impeccable. I remember he said he loved Sao Paulo, and that he would come back to bring his whole tour.

Another song I asked him on twitter was played, “All At Sea”. That was supposed to be the last one of the show, but he could tell we wanted more, and we could tell he wanted more, so he asked for another song and delighted us with “Wind Cries Mary”. What an amazing way to close the show. He said goodbye, saying that they would love to play for us all night, but there was other artists waiting to enter the stage. He left, leaving behind 20 thousand screaming, old and newly conquered fans.

After that I left the front of the stage and sat down on the floor, to cry for myself, tears of happiness. There are no other words to describe what I felt, and I hoped I could pass that to you reading this. It was the happiest time of my life, and no matter what happens, no one can take that away from me.

I would just like to say thank you to Thaina for such a beautiful review and for sharing her photos & experience with all the fans. 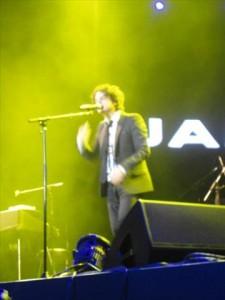 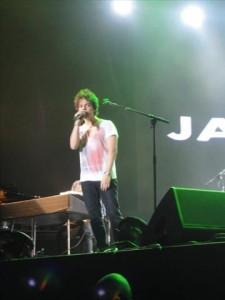 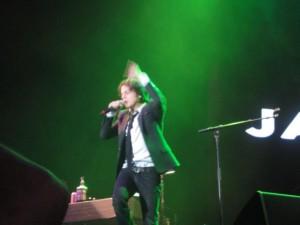