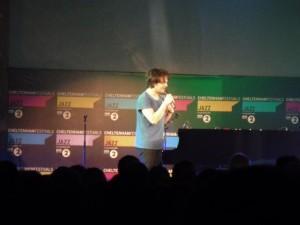 As some of you may know, my start to the day of Jamie’s gig at The Cheltenham Jazz Festival started off a little rock n roll, or just plain stupid lol.

After landing at Manchester airport at 8.30am following a week long holiday in NYC, I just had enough time to go home, have 1 hours sleep, shower and grab my train to Cheltenham.

I was struggling to work out what day of the week I was on, let alone the time lol. But I knew that Jamie’s show would give me that adrenaline kick I needed. And I wasn’t disappointed.

The show was like no other Jamie show I have seen so far. For one there were lots of cameras around with their flashing red lights, indicating they were filming live across cinemas in the UK and around Europe. And Jamie played solo, just him and his piano taking centre stage at 8.30pm at the Jazz Arena tent. A smaller venue than last year, when he played the Town Hall, but I can see now that the smaller venue worked better for a solo show such as this.

This is one of the first times I have ever seen Jamie have a set list and stick to it, and I guess it must have felt strange for Jamie too.

The show started with “I want To Be A Popstar”, a song that Jamie wrote when he was 19. I had not heard Jamie play for a long time so it was a nice surprise. It seemed to go down very well with the audience too. With lyrics that include “Maybe next year I’ll pretend to be gay I’ll sell some more records in a flash that way” it caused a few giggles.

We were very spoilt at this show and treated to some new tracks from Jamie, some of which he said we will never hear played again. I sincerely hope this isn’t true as there were some real beautiful songs in there. Like, Take Me Outside Of Myself.

I was pleased to hear Jamie play “Everyone’s Lonely” again, truly beautiful. This really should have made the cut for the UK version of The Pursuit.

One of my many highlights was when Jamie played “Wind Cries Mary” with his loop machine, very funky and gave the song a whole new twist, and now I have fallen in love with that song all over again.

It was rather disappointing that some fans around us had issues with those of us choosing to record parts of the show. As we know this is something that is not frowned upon by Jamie with videos even being added to the official website. So regrettably, I do not have as much filmed as I would have liked. And seeing as I have been reliably told there will be no DVD it’s a great shame that some of these one off songs may have been missed for other fans who were not there.

Other highlights from the night was another new song, Rayleigh Road, stunning song with a lovely melody, definitely a winning formula. Jamie wrote this song about his Burmese mother & grandparents arriving and starting life in the UK. Inspired by a photo on his wall at home.

Meet Me At The End Of The World was an interesting one. This was another new song from Jamie which he said he wrote, and then went back to it to discover it actually wasn’t very good. I actually don’t think it’s that’s bad a track, a real grower.

It was a real pleasure to see Jamie play again, and to also hear some fresh new material. He started off a little nervous but definitely ended on a high note. I am definitely more intrigued about what we are going to hear from Jamie on his new album. 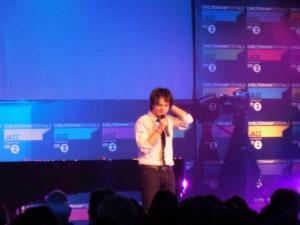 Other songs from the set list included, Comes Love, Don’t Stop The Music, I’m All Over It, But For Now, These Are The Days, All At Sea, High & Dry, Do You Know What It Means To Miss New Orleans, You Got The Love/Feeling Good and I Need More Pain. I apologise if I have missed any off the list, but I’m afraid the tiredness began to take over.

The show ended with the lovely Gran Torino, it doesn’t matter how many times I see Jamie perform this, it still gives me goosebumps.

After meeting a lovely fan outside who saw the show from a local cinema I hear the cinema broadcasts went rather well and really brought the fans together. Perhaps this is something that can be done again sometime in the future.

I have to say that everyone at The Cheltenham Jazz Festival did a superb job. Everyone I met were very friendly and also very helpful. Unfortunately that’s not something you find much of these days. I loved the festival atmosphere, and the great weather was a bonus too. So if you want to attend a well run and well organised festival I would recommend you check Cheltenham Festivals out here: http://www.cheltenhamfestivals.com/. Their next festival will be the Science Festival from the 7th-12th June 2011.

I should also mention that whilst there I also saw Andreya Triana, if you haven’t heard her yet, check out her music here. She has an amazing soulful voice: http://www.andreyatriana.com/

All in all I had an amazing time, and I know that Jamie said playing solo was a big challenge for him. But I really don’t think he has anything to worry about. I couldn’t fault a thing. I can’t wait for next year’s festival.
🙂