Bridgewater Hall is a lovely venue, and I had no idea just how big it was until I went last night. It easily held over 2,000 people.

Jamie came on stage at 9pm, by this point I was already bursting with excitement as it’s been a while since having to sit through a support act before a Jamie set.

Jamie started the night with Don’t Stop The Music, a great one to get the crowd going. Just wish it had been a standing gig so I could have had a boogie. However the song was amazing all the same.

Then on to Just One Of Those Things, I am definitely liking this song the more I hear it. And last night I actually took note of the whole band rather than just Jamie and noticed how amazingly Tom, Chris, Brad & Rory all play this song.

I’m All Over It was up next, and I love the harmonies that Jamie has introduced to this song, they all sound great singing together. I loved Jamie’s very high pitched I’m All Over It too. 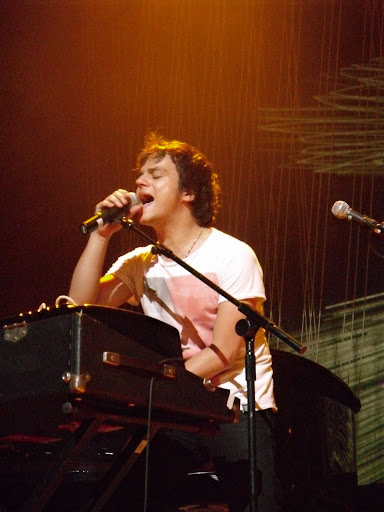 Get Your Way, I’ve always liked this song, a real catchy upbeat tune that gets your toe tapping.

Not While I’m Around, I love love love this song and I’ve said it before and I’ll say it again I actually get goose bumps every time. The intro to this song when played live is amazing!!. However I don’t know what it was but I felt last night this song just wasn’t quite right, perhaps it’s because I have heard it live quite a few times in the last few weeks or maybe there really was something missing but for me it just didn’t sound as good as it has previously.

Twentysomething, great to hear Jamie singing this one again, I am sure that towards the end of the song Jamie sung I’m a 3o something. Did anyone else pick up on this?

I Think I Love, I was very surprised that the audience were very quiet during this song, there was no laughter to the funny lyrics at all. Very strange, Manchester seemed a little quiet last night??

All At Sea, I can never fault this song seeing as it is one of my favourites. I’ve not heard Jamie sing it live for a long time so I was overjoyed when he sung this one, definitely a real treat for me.

If I ruled The World, this is another of Jamie’s songs where you can hear a pin drop. This song was sung to perfection last night. And in my opinion Jamie had the audience right where he wanted them, right in the palm of his hand, hanging on every single word. Such a beautiful song with an amazing vocal.

Frontin, yet again this song was accompanied by Jamie’s looped beat boxing and voice. I don’t think I could ever get bored of seeing Jamie do this, it’s just amazing. And going by the comments I could hear behind me I wasn’t the only one blown away by it.

ALSO READ  I Get A Kick Out Of You - Keswick Theatre

These Are The Days this is one of those songs where Jamie always seems to get cheers from the audience as soon as the music starts. I guess it’s one of those oldies but a goodies and everyone loves hearing it, including me.

What A Difference A Day Made, again Manchester seemed delighted to hear this one too.

We Run Things was up next and it’s the first time I have seen it played live and I really liked it. Very clever how they replicate the sound from the album. Rather funny that Jamie introduced the song as having written it by mistake in his neighbour’s bedroom.

Everyone’s Lonely, this is an amazing track that Jamie said didn’t make it on to the album, but I do believe it’s on the Japanese version. Why oh why is this not on the UK/US album??? It’s amazingly beautiful. Please release this song Jamie, your lyrics and vocal on this one are outstanding!!

Then onto I get A Kick Out Of You, that saw Jamie hitting himself and not just the piano to make music. I wonder how many bruises he must have now? That rather hard thump on his chest last night must have hurt somewhat.

Jamie then sung Cry Me A River out in the audience, I’ll never get bored of seeing Jamie joining the audience, more artists should do it I think. It really makes the audience feel they are involved. What can I say about this one that hasn’t already been said, a faultless performance again.

Mixtape, a great one for the audience as by this time as we were all standing and could really enjoy ourselves, instead of the polite toe tapping which no doubt was sending a rather annoying vibration/movement down the entire row I was sat on all night 🙂

Overall the gig was outstanding, I feel like I always say that. But I tell no lies it’s just Jamie really is that good every time. He knows how to deliver that’s all I can say.

I really liked the idea of the big screen and lighting effect on stage, it definitely created a great atmosphere (or at least for me anyway)

It’s a shame that the audience seemed a little quiet but perhaps that was just my view of it from where I was sitting??. There is no doubt though that everyone there had a great night.

I will end there as I fear I have used the word amazing far to many times and I will only continue to use it if I write anymore. 🙂

Jamie I can’t wait for Oslo, ash cloud depending of course. 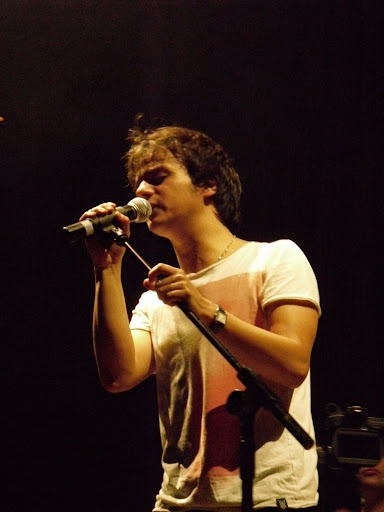