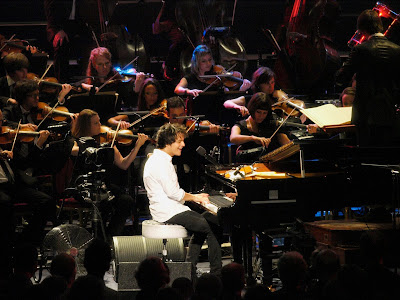 This is Jamie Cullum ‘s year. As the Proms announcer told the Royal Albert Hall crowd, with 4.5 million album sales, the 31-year old is the most successful young British jazz musician ever. He worked recently with Clint Eastwood. He’s been touring a new album extensively with a new band. Oh yes, and he got married (*).

But since April he has also started to re-define where jazz sits in the BBC’s output, and is on the road to becoming an integral part of the corporation’s offer, and maybe, in time, of its identity. Following the death of the universally revered, irreplaceable Humphrey Lyttelton in April 2008, there had been a hiatus. Humph was a tall, constantly reassuring national icon. His immensely generous and warm presence served as a permanent rallying-point for the music.

In the past four months, the much smaller shoes of this “man-boy”, as he described himself, have traced a continuation of that line of footprints every Tuesday evening, as BBC Radio 2’s main jazz presenter. There has been a huge variety of music on offer. He has often brought surprises. He has been reverent to the jazz legacy, but also knows, from deep within, its special brand of irreverence.One can only conjecture, but in the long run this Prom may well have put down an important marker of his arrival at the citadel of broadcasting in Langham Place. 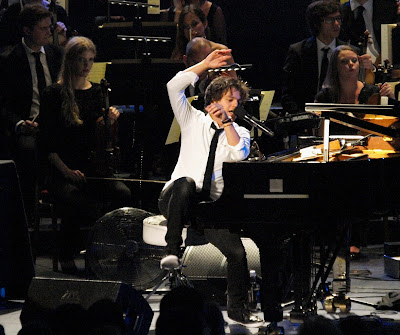 The audience last night took its time to warm up. They didn’t need the extreme defrost setting which I saw Cullum apply to a Cheltenham audience in May. But the first number, All at Sea, with its dollop of MOR string sound from a 27 piece orchestra was not exactly the thing to get the pulses racing. Indeed, applause only really got going once Rory Simmons on trumpet and Tom Richards on tenor sax started ripping with some muscularity through the changes of “Just one of those Things.”
Cullum talked of his first Prom as a proud moment, as humbling. He played “What a Difference A Day makes,” recalling an early appearance on the Parkinson TV show.

ALSO READ  Watch Jamie's Interview And Performance On "This Morning" 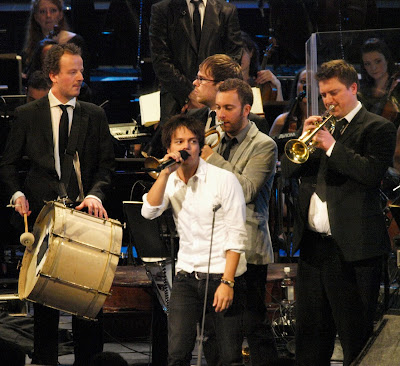 The Heritage Orchestra, deftly conducted by Jules Buckley, fitted well into the role of backing band. They took their many chances to shine, but they gave hints of a wider range of character, which didn’t fully come across. Highlights were a New Orleans Marching band which brought into the limelight at the front of the stage a couple of the most triumphant and joyous sounds in British jazz: Tom Rees Roberts’ resplendent high trumpet (above right) , and Andy Wood ‘s authoritative sousaphone.

Blame it On My Youth introduced a cameo appearance for guitarist Martin Taylor, described by Cullum with true Brit understatement as a “real jazz musician.” Chris Hill on bass and Brad Webb on drums are the kind of rhythm section players who just nail absolutely everything, and in style. Mixtape got the moshers in the Arena pogo-ing and clapping. 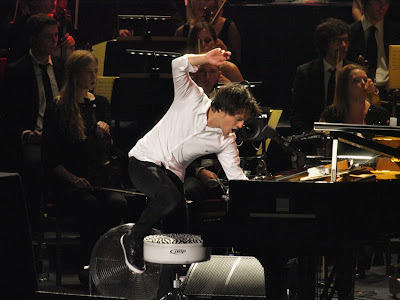 I particularly enjoyed the narrative sequence by which These Are The Days with its Ba-da-da-dup-da vocal refrain morphing, via a piano interlude, into a Ray Charles Big Band ending- orchestrated by Tom Richards. It ended with impressive mountaineering around the piano by Cullum (above), the appropriation of a megaphone, and an in-your-face final chord consisting of an entire raspberry bush of altered notes.

Kevin Le Gendre’s elegant account of Cullum’s career, and his elaborate and slightly tongue-in-cheek programme notes to the songs added to the experience. But the main point which Le Gendre made was a serious one: again and again, Cullum’s triumphs have happened “in the one place where it is impossible to fake talent: the stage.”

As the meditative Gran Torino sent the huge crowd away extremely happy, it was clear that he had proved it again. On the stage. That’s showbiz. This is also integrity.

This article was written by London Jazz – read the article here