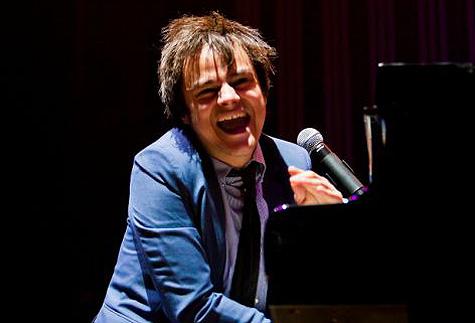 Birmingham’s Symphony Hall provided the perfect setting for diminutive Jamie Cullum to bring his own brand of cross-over jazz/pop to a new audience.

It was just intimate enough for the highly talented performer to reach out and get his audience just where he wanted them, with a clever stage set helping to create the intimacy of a jazz club within the soaring Symphony Hall.

Although he has, in a relatively short time, established himself as Britain’s biggest selling jazz man, Cullum performs in a wide range of styles and is generally regarded as a “crossover” artist giving his music appeal to a much broader audience.

Last night’s show showcased what a fine vocal range Cullum has, with tender renditions of standards like I Only Have Eyes For You and If I Ruled The World.

By way of example, Jamie’s version of Rihanna’s Don’t Stop The Music got the show off to a flyer with the hyperactive Mr Cullum unable to sit still on his piano stool – more Jerry Lee Lewis than Oscar Peterson – this was followed by I’m All Over It, another song from his current CD The Pursuit, then came All At Sea, an earlier composition recalling his time as a cruise ship pianist, with echoes of a young Billy Joel.

By now the sell-out crowd was really warming to this little man with a big talent. The excellent line-up of four additional musicians moving from conventional jazz combo to rock five-piece outfit with ease. But one of the highlights of the evening was Jamie’s brilliant piece of improvisation with his version on ‘Frontin’, in which he loops the sound of his own voice, through two microphones, delivers beat-box percussion by drumming the top of the piano one moment and his own chest the next.

Excellent, as was his I Get A Kick Out Of You, a cappella except for double bass player Chris Hill’s virtuoso performance.

As the show reached its climax, Jamie, together with his four band members, moved off the stage and into the audience where he commandeered an aisle seat and performed an unamplified version of Cole Porter’s Cry Me A River, urging the audience to gather round as if joining in with an intimate sing-along. A great end to a terrific night.