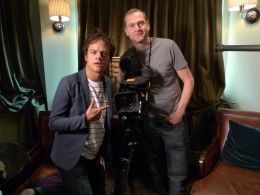 Its May I have just finished filming at the Cheltenham Jazz Festival 2010, what a brilliant event, I love music but have never been much of a Jazzer, I think my mind has been changed I have been “turned on” as they say, to Jazz.
Director/Producer Mike Wiseman was making a short doc about the festival, a behind the scenes for Sky Arts. We were filming performances, interviews, and general atmosphere in High Definition.
I used a light weight kit, Camera HDW750, 2x lenses, tripod, and wireless monitor, I lit all the interviews with my new LED Pag toplight which worked a treat for speedy set ups, all packed in my ruck sack.
For Jamie Cullums interview I had a bit more time, as it was the main interview used my Kino Bar fly and a couple of Dedo lights.
Soundman, Geoff Price, took a feed from the sound desks using a radio mic for good performance sound.

Jamie Cullum was the headline act and blew the roof off Cheltenham Town Hall on the Sunday night, what a performer, I was on stage filming the performance, while Mike filmed from the balcony on my Canon 5d Mk11.
We then filmed an interview with a hungover Jamie, on the Bank Holiday Monday morning, he had been jamming in the Hotel until the early hours of the morning.
He gave a great interview, and what a nice chap he is, go buy his album!

I think its a rare thing but I have to say that I enjoyed nearly all the acts we filmed, highlighs being Jamie Cullum, Fringe Magnetic, Empirical, the incredible drummer from Polar Bear, Seb Roachford, and Beatboxer Shlomo who is something else, YouTube him or just go and see him you won’t be disappointed.