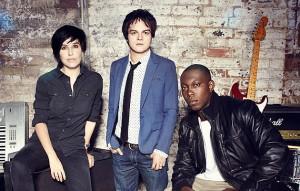 After our first double-whammy of audition shows, we’ve already been treated to tears, tantrums and tonnes of talent. But with singers and musicians from all over the country fighting for their place in the Must Be The Music semi finals – there was bound to be plenty of drama…

Judges Dizzee Rascal, Sharleen Spiteri and Jamie Cullum had their work cut out sifting through hoards of promising talent – and, despite a few disagreements, there were many acts that they were unanimously blown away by. Loop Fiddle Player Diathi, profoundly deaf Pianist Danny Lane and Harpist Hero were amongst those who received three Yeses from the music maestro’s and found themselves one step closer to reaching the £100,000 prize.

Cheeky grime group Flow Dem, Pianist Kyan and quirky Singer and Guitarist Emma’s Imagination also had lots to celebrate as they proved a hit with the audience and Judges alike.

But the Must Be The Music Judges weren’t easy to impress; ‘edgy pop boyband’ Mantrixx, ‘spiritual rock ‘n’ roller’ Bradley Kom, electro drum and bass singer Wrong Tom and Facebook Lover DJ Lantan all failed to meet the grade and received a negative flash of red.

ALSO READ  Don't forget to enter the @MustBeTheMusic competition to win tickets to the LIVE final this SUNDAY!! #MBTM

After failing to impress first time round, all singing, all dancing guy group FDM had to wait a nail biting 24-hours before being called back to perform another song. With a little persuasion from an enthusiastic audience, the Judges were sold and rewarded the lads with a solid line of green.

It was brother and sister fronted indie group The Sticks who sent the judges tempers soaring though. With Dizzee claiming that Sharleen ‘gave into the pressure’ as she switched her No to a Yes, allowing the group through to the next round. The dispute continued long after the day closed as Dizzee warned ‘This is war now.’

So far the judges have found a number of talented musicians who they will take with them to the next round but there are still plenty more to find. Make sure you tune into SKY1HD from 7pm on Sunday 22nd August to see the final double-bill of audition shows and find out who else will be continuing to the next stage of Must Be The Music. Trust us, it’s not to be missed.