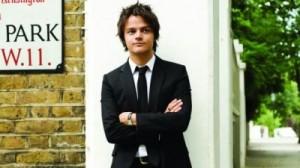 The musician works in the Algarve 22 days. Antes disso falou ao i em directo da digressão nos EUA Before that i spoke to live the American tour.

Mama’s boy. Could begin as this prose on one of the greatest wonders of the contemporary piano pop. Jamie Cullum was touring the U.S. when the phone rang for a Portuguese newspaper interview. Tell us what you miss from home and a boy who is very connected to the family. Nothing that does not compensate with a few injections to the ego. “It’s comforting touch in this country. I am far from home and my people, but here there is a network of very dedicated fans. People treat me well and enjoy my music,” he says from the hotel where he slept a nap. Now that he returned to Europe, the musician of 33 years comes to Portugal for a single concert, day 22, in Allgarve Music Festival.

In all, Jamie Cullum has performed in over 20 U.S. cities. As usual, most of the time is spent in a luxury bus, which seems anything but a means of transportation. “We travel often during the night while the team sleeps. It is easy to forget that we’re in a bus: We have a lounge where we spent a lot of time to read, play DVD and drink beer,” he explains.

The U.S. tour was the backdrop for his latest work, “The Pursuit”, an album that, in his own words, represents “an attempt to be more faithful” to its influences, from pop to jazz, rock. “A sound more modern,” sums up. I would add that this is perhaps the most experimental of his five records, where Cullum tests the talent of multi-instrumentalist. On tour, the musician does – be accompanied by four members of the band, two technicians and a guy who sells T-shirts. ” “By the way we stopped a lot of times, to take small-breakfast in a roadside café, play soccer, go shopping …”

Tiny’s enthusiasm for being in a tour is easily seen in each of his words. Even though it says that “this concert is the real deal of a musician” or that the studio is a key part of the creative process. “I obviously hope that people will buy the disc, but only the fact that being here is inspiring. The stage is something that is in the blood of a musician.” Speaking of inspiration, it is customary to compose while walking on the road? “Normally I have a keyboard or a guitar around. Things appear more fluid when you walk to places and meet new people. And of course, a tour allows us to know lots of girls,” he jokes.

It is not hard paste Cullum’s voice to an almost boyish personality. Neither does he seem able to separate this idea when he asked if I ever would have been able to provide all this, the touring, fame, discs. “Touching the world is like living a dream. I know it sounds a cliche but the truth is that there was that little kid who sang in front of the mirror with a toothbrush to make the microphone.”

Was it then, when I gave the first chords on guitar, the parents took him to see Ben fold’em’s Five and Herbie Hancock. “Whenever I think about it, I remember that these were two nights that made me want to take music more seriously.” From boy wonder, it took some years and many concerts in between. Jeff Buckley, who Cullum has one of the most famous versions, was one of them. A privilege, guarantees: “I was a kid, it was a tear of luck to have got to see – it live.”

Despite include original compositions in their records, and the versions that became an artist Jamie Cullum heard worldwide. But the musician says the choice of songs is very rarely thought. “The only caution that I force myself to take is to make a very own interpretation, which, while not destroying the music nor betray the memory of fans. A great responsibility?” I’d say it’s just music, that comes under my fingers in a moment of great love and respect for the author. ”