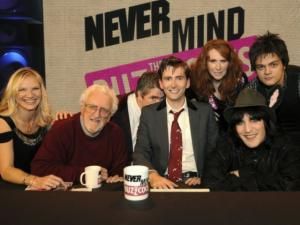 Published on Dec 17, 2009 class=bodycontents> Last night saw the broadcasting of a very special episode of panel game Never Mind The Buzzcocks, which pretty much amounted to a Doctor Who takeover. Buzzcocks is a terrific show at the best of times, but the bringing in of David Tennant as guest host for the week was an inspired move. We’re not going to attempt to review it, we just want to give you enough tasters to go and seek it out on BBC iPlayer if you’ve not seen it yet!

Joining Tennant on the show was Catherine Tate, sitting alongside Noel Fielding and Jamie Cullum, while the other team – captained by Phill Jupitus – featured Doctor Who fan Jo Whiley, and the mighty, mighty Bernard Cribbins.

Seriously: the man is a genius. The highlight for me was when Noel Fielding asked Cribbins – who was banging out terrific one liner after terrific one liner – if he wanted to write for The Mighty Boosh (although Cribbins’ line about Kylie’s bra nearly beat that). The promotion of Bernard Cribbins to the Doctor Who assistant role for the forthcoming two specials, The End Of Time, looks to be an inspired move, and he was clearly having a whale of a time here.

Catherine Tate, meanwhile, was more than holding her own. Her lack of Who knowledge proved to be very funny, indeed, not least Tennant’s wide-eyed surprise at just how much she didn’t know about the show. And naturally enough, he did the decent thing and started asking her Doctor Who questions.

Throw in an appearance from the Ood, a Dalek turning up in the identity parade and a look of bewilderment on the face of Jamie Cullum for most of the show, and it was a terrific half hour of fun.